Marc Goldstein dedicates his professional time to service as an independent arbitrator and mediator of complex international and domestic business disputes. He established his own practice as a neutral and advocate in 2007. For more than two decades following graduation from the University of Virginia Law School he practiced with Proskauer Rose in New York, handling complex civil litigation and representing American and foreign clients in international arbitrations against sovereign States. A frequent lecturer and writer on international dispute resolution, Mr. Goldstein has authored the Arbitration Commentaries™ “blog” for the ADR community since 2009.

Chambers Global 2020 and Chambers USA 2020 each rank Mr. Goldstein in “Band 1” (first tier) of U.S. international arbitrators, and report comments from peer review interviewees such as these: “garners accolades for his broad and deep knowledge of the international arbitration process”; “top-flight – exceptional in the trenches and has cutting edge knowledge”; “a sound, creative and independent thinker”; “very thorough in his preparation”.

“Sources consider Marc Goldstein to be ‘highly regarded’ and ‘exceptional’ for his work as an independent arbitrator and mediator.”
– Who’s Who Legal: Arbitration 2019 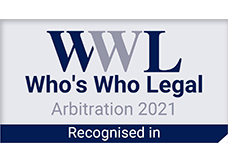